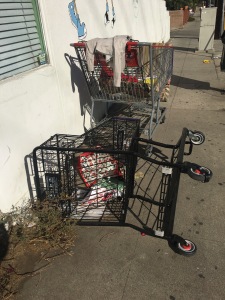 A dead fish, washed up on a beach, is unremarkable. A hundred are ominous. So with shopping carts and their contents. One overturned cart, abandoned in the middle of a parkway, means nothing. When they multiply, the wreckage spilling across pavement, I wonder.

Even with new-ish theft-prevention systems – wheels that lock when the cart crosses the store’s invisible property line – shopping carts end up in all parts of the city. They are the U-Hauls of the addicted, evicted, abused, shamed, and unlucky. They’re symbols of the götterdämmerung we have feared for seventy years. In Cormac McCarthy’s The Road, survivors push shopping carts along abandoned interstates, eying one another fearfully – or hungrily.

Carts do not fall by themselves, disgorging their cargo on a whim. They’re built like tortoises, designed for stability, with low centers of gravity and widely set wheels. A Santa Ana’s 50 mph gust, powerful enough to break tree limbs, can roll an abandoned cart into traffic but, unless it’s on a steep incline, won’t often overturn it.

Someone pushed these carts over. Their stricken posture is fossil evidence of a moment’s rage. There’s a lot of rage on Lincoln Blvd. While there’s considerable diversity among L.A.’s homeless, that diversity includes people who once upon a time, in a less courteous age than our own, were simply called mad or possessed. These are the men and women who scream fuck you! at passing cars, at the people waiting for a bus, and at the air. When they camp on the sidewalk, they speak to every scrap of their material lives, hurling the hoard one item at a time into the street or sidewalk: snack bags, candy wrappers, bubble wrap, torn magazines, pillows, sheets, shirts.

It is well known – how could it possibly be otherwise? – that homelessness exacerbates otherwise treatable mental illness. And shame itself is corrosive. From George Orwell’s Down and Out in Paris and London through the work of homeless writers and artists themselves the struggle to maintain dignity is as difficult as any other. (see, for instance, Boston’s The Pilgrim or London’s The Pavement), Though most homeless encampments are free of rage most of the day and night, we remember the brief outbursts more vividly than a whole month of discomfort or disdain indulged when we step around a tent or sleeping bag.

Set against the extinguished rage represented by the morning’s overturned shopping cart is the rage of local homeowners. In my neighborhood there are many who hate – passionately and whole-heartedly hate – people on the streets. They share their vitriol on neighborhood networks and on local-interest blogs. They accumulate lots of likes and thumbs-up and smileys and winkies. They’d like the city to just arrest anyone caught living in a camper, a tent, or a sleeping bag. They’d send them  them to the Antelope Valley. Let Lancaster deal with them. If Lancaster and Palmdale complain, then just jail them.

Of course, there aren’t enough jail cells to accommodate the more than 40,000 people sleeping rough on L.A. streets on any given night last year. And a jail-building program would be rather ironic, wouldn’t it, an especially expensive and ineffective way to do what needs to be done anyway: provide shelter, public services: treatment for those who really are disturbed and, for those who aren’t – the majority – a fresh start. L.A. voters committed in 2016 to building housing for the homeless, though the money will not likely go as far as the need. This vote further infuriated the already-enraged.

It’s not too difficult to imagine a dystopian future in which a mass movement of populist homeowners and upscale renters seizes political power and ships L.A.’s 50,000+ homeless off to some camp north of Barstow, deep in the high desert. 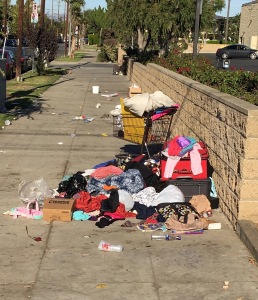 A film version of that dystopia will open with an eerie image: block after block of overturned carts, their blankets and snack wrappers strewn downwind. Those carts won’t stay there long. Companies subcontracted to the supermarkets will recover the carts by lunchtime. The Department of Sanitation will have the trash picked up by the end of the week. Anyone who wonders how the homeless are faring in their new Mojave Desert camp will confront armed guards. There will be no press conferences, and lawsuits will be tossed out of court. It will take a year of such silence to suffuse the homes of Los Angeles with a breathable amnesia. Once inhaled, we’ll all forget.

Yes: like thousands of fish writhing on the beach, carts and garbage and people can be cleaned up, disappearing as well from memory. Not so the poisons that heaped the carcasses onto the dead sand in the first place.