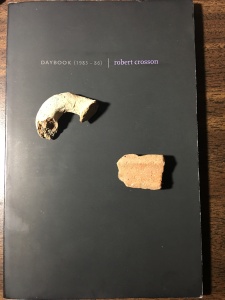 Crosson published five books of poetry in his lifetime while making a living as a sometime actor, housepainter, handyman, and property caretaker. There’s a Charles Bukowski sensibility here, and I can imagine Crosson painting houses all along Bukowski’s mail route, the two of them grunting at each other when, under the painter’s ladder, the postman thrusts the mail into the box.

The best short bio of Crosson is on the Project for Innovative Poetry (PIP) blog, which took me to the Green Integer blog, then to Green Integer Press, and finally to an interview with Douglas Messerli who’s responsible for all three. Messerli is a well-connected L.A. poet who runs ten separate blogs on all kinds of subjects. He’s a local renaissance man.

It’s funny that I discovered Crosson before I found Messerli. Crosson never broke through, and it’s clear from the daybooks that he either didn’t care about a literary life or didn’t want to let himself care. Anyway, none of my handful of books on the postwar L.A. poetry scene devotes much attention to him. If Sophie Rachmuhl mentions him, I don’t recall (there’s no index to Rachmuhl’s Higher Form of Politics). He didn’t make it into Goldstein’s Poetry Los Angeles either. Bill Mohr gives him just three mentions – that’s all they are – in The Holdouts. Yet Crosson hung out with a lot of well-known locals, among them Messerli, Paul Vangelisti and John Thomas. He makes himself sound like a difficult guy, but for a difficult guy, he had loyal friends.

Crosson’s daybooks did what daybooks do: preserved half-formed thoughts, not originally intended for publication. There are two-word manifestos, orphaned lines of poetry, mentions of books and music (classical, jazz) that reminded Crosson of something else, maybe something important.

Crosson’s daybooks have a koanic quality. Each entry, sometimes each line, is a non sequitur. This isn’t like reading Joseph Joubert’s Notebooks, probably the last work I read that is anything like Crosson’s. Joubert’s short sentences usually cohere, like cosmic dust sucked into an aphorism’s gravity well. Crosson’s are free-floating pebbles: snippets of conversation and outbursts of disgust along with scenes of self-indulgent anger, impatience and (more rarely) delight. Here are scenes from a life: sleeping on a sofa, repairing a door hinge, pissing, glancing purposefully at a teenage boy’s tight ass, writing a poem, jacking off to get to sleep; feeling warm, feeling wet, feeling sick. Here’s Crosson on a typical day (54):

Lieder. Fable. Lyric theater.
“The more pastoral acceptance
Of what is Truly Real.”

Crosson is no stranger to himself. He says (20):

I never could think straight. I don’t see a straight line. I see curves, kinks and angles. That’s why I could never be a scholar, though they make good company.

Surrealism? I didn’t know what that meant… All I saw was the words. I first read Stein she made no sense, after Nin she did. I was a somber kid. Took Patchen, Beethoven and two love affairs to show me I had a sense of humor.

Stein’s almost exactly… audience bothered her; me too. I liked discontinuity—in no rush to “understand.” Patchen taught me that and showed me poetry.

To read this – and I did so with much pleasure, in a couple of late-night hours – I also followed Patchen’s advice: be in no rush to understand. The pages seem to invoke Creeley at every turn: “first thought, best thought.”

Here’s the question, though: What is it in the raw meat and bone scraps we find in journals, diaries, daybooks, and notebooks that hooks me and so many other readers? Why would we be attracted to something so disorderly?

Not all journaling is so wayward. It makes a kind of sense to engross ourselves (as my dad did) in James Boswell’s companionable recollection of travels with Samuel Johnson or, more lately, in Knausgård’s relentlessly narrated Min Kamp. Such books are like storm winds that never tire of blowing. There’s coherence and purpose in those gusts, even as they wheeze and whistle shamelessly into every detail. Works like these immerse us so deeply in the lives of other human beings that, ever so subtly, they change us. Born again by the Book! Easy to see the appeal, and easy to see why so many of us evangelize their tens of thousands of pages, held together in promethean bindings.

But Crosson’s work is not a monument to a singular vision.  Really: why would we want to read this? And why would we read others who write like he does? Why Chamfort? Why Joubert? Where’s the attraction? It’s as though I collected fine ceramics and then one day decided that I just must buy a box of broken plates and spend a full night picking each piece out of the box, turning it this way and that, thinking at length about it, and finally mounting it in a display cabinet secured to the entry wall of my mind’s Memory Palace.

But then, I do like broken crockery, don’t I?

On a beach in Zakynthos six years ago, I picked up handfuls of broken terra cotta, washed up from some anciently drowned wine-boat sailing (I decided) from Corinth to Brindisi. They came home in a suitcase. This was theft: these small fragments of fired clay belonged where they lay. But I make a bad habit of this, my venal sin. At a  Nabataean archaeological site in Israel, I once walked out to the abandoned city’s trash dump and did the same thing, pocketing the handle to some small plate or pot.

What is the point of these transgressions? Once relocated to my house, these objects become mere things, on a shelf above my desk. Still: when I handle them, I feel exactly as Christopher Woodward said I would. In Ruins, he writes:

immersion in ruins instill[s]… a lofty, even ecstatic, drowsiness… a strange sense of displacement when we find that, living, we cannot fill the footprints of the dead.

Crosson’s daybook entries give me as immediate and intense an experience of the dead man’s mind as I’m going to get. Reading them – he did not intend these fragments to be published – I am a voyeur. I spy on him from the vantage of the present and he, though maybe sensing my presence, is powerless to stop my transgression. There’s a delicious sense of the illicit in such trespassing. Let’s not forget that.