Though bureaucracy is unloved, many of us devote our leisure time to bureaucratic pursuits. We organize needle and thread in sewing kits, sort bolts and washers in  pull-out plastic drawers, and organize craft supplies in labeled cubbies, drawers, and cupboards. A few of us still record baseball games by hand in great detail, enabling us, years later, to recreate an entire play by play. By nature, many of us are methodical and rule-bound, finding in organizing and record-keeping a low-wattage thrill of expectation, attention and completion. Bureaucracy is orgasm’s fully clothed and office-ready kin.

Of all our private obsessions, family history comes closest to bureaucracy because it requires engagement with history’s actual bureaucracies. To excavate family relationships requires archival research, either online or in person. 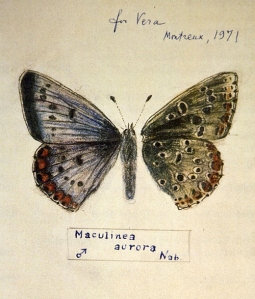 Family history has a misleading resemblance to academic history, with its emphasis on original source documentation. In fact, it’s more like entomology. The lepidopterist Vladimir Nabokov put it well: “My pleasures are the most intense known to man: writing and butterfly hunting.”

We go to the archives not to develop a full sense of the historical scene, but to capture a particular document that will add to our collection. It is always a routine document, one created two centuries ago by a county clerk or a minister or a registrar or an immigration officer or a legal factotum. As though it were one of Nabokov’s butterflies, we net the thing, snuff it in a kill jar, then we pin it in a database or notebook or card file, claiming its iridescent datum for later study and meditation.

The enjoyment of finding a birth date, a parent, a sibling, or a hundred-year-old address is balanced, as it is for the insect collector and for all other bureaucrats, with the knowledge that, in the wild, there are still facts which have, as yet, escaped our nets.

Imagine, since we’re talking about Nabokov, that you would like to collect all butterflies and moths named in his honor. According to the German lepidopterist Dieter E. Zimmer’s A Guide to Nabokov’s Butterflies and Moths, there are seven subspecies, species, genera, and infratribes bearing some variation of his surname. So you collect them. But then, you’re missing a female of this species, or a species of that genus. And once you’re done with that, what about the dozens of moths and butterflies named for characters in Nabokov’s novels, for example Paralycaeides hazelea, “for Hazel Shade, the daughter of the poet John Shade in Pale Fire.” Then there are those insects whose common English names belong in your collection: Nabokov’s Brown, Nabokov’s Fritillary, and (could Zimmer be joking here?) Nabokov’s Wood Nymph.

This the experience of every happy bureaucrat, filling in a spreadsheet’s empty cells either by hand or, in recent decades, via keyboard. It remains the experience of the genealogist. With this difference: every new ancestor brings to the collector the  the sharp awareness that the blank spaces in the family tree have just doubled: who are the new ancestors own mother and father?

So the number of empty spaces in the collection doubles with every generation. Let’s do the math: two parents, four grandparents, eight great-grandparents, then sixteen, thirty-two, sixty-four, one hundred twenty-eight, two hundred fifty-six, five hundred twelve, one thousand twenty-four, two thousand forty-eight, four thousand ninety-six. That’s thirteen generations, enough to get back to the 16th century. That is just the bare minimum. To do the history of a family is to recreate, as closely as possible, its entire intimate world: sisters, brothers, step-children, occupations, education, criminal records, cause of death, psychological trauma – anything we can derive from the material and paper residue left behind by the dead. 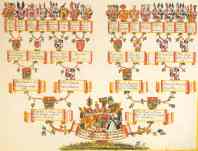 Like lepidopterists with their shadow-box displays, we pin our information in conventional and mass-produced formats. Though these are now digital, they recreate the pen-and-paper systems employed forty and more years ago. There are numbering systems for each ancestor (Ahnentafel, Register, Henry, Dollarhide and others), a dozen or more graphic representations of family relationships (waterfall, pedigree, hourglass, lineage, fan chart, etcetera).

Both government and scientific bureaucracies sum up their data in characteristic forms (think of the 1099 or the census return, for instance). In genealogy, that form is the “family group sheet,” with two parents (father on the right, mother on the left), and cells below for  “birthplace,” “burial,” “occupation,” and so on. The entire “story” of a family is forced into this grid. Even Nabokov, who certainly knew how to paint and write lyrically of the insects he captured and killed, described them in the concise and rule-bound way required of any biologist who hopes to communicate with any other biologist. Family historians do interview living relatives, write memoirs, and write up their findings (with titles like Pioneers and Heroes: The Smith Family in History) for interested kin. But even when communicating with siblings and cousins, the group sheets appear, in an appendix or, more frequently, in the text itself.

When we complete an entire form – a family group sheet, say – we may allow ourselves to imagine that we actually know our something about the dead, that we’ve made the dark shroud of death translucent, that the wrist’s stilled pulse beats beneath our fingertips. Entomologists do the same when they display their carefully arranged insect carcasses on fields of satiny black cloth. The wings of a lunar moth may opalesce in under lamplight, but nothing mounted behind glass will ever move again. A scientific name tells us everything about the animal except its heartbeat.

Genealogy performs this trick on our senses by convincing us that each word in the family group sheet stands in for the complexities of a living person. When we complete the box “occupation,” we will ourselves to believe we’ve fully described a working life. When we type in a religion, we assert that the faith professed at the precise moment before burial was the faith professed an hour, a year, or a decade earlier. When we list a wedding date – without a corresponding divorce – we imagine (unless we know better) a reasonably content couple, in old age.

Dead butterflies and indexed ancestors: what do I know about the living?

Here’s one set of facts I know: Thomas Jenkinson, my great-great grandfather, appears in a register of births and deaths for Marown Parish on the Isle of Man in 1830. His life ends in Seneca, La Salle County, Illinois in 1907. He was a slategetter. He was a miner. He was a “Primitive Methodist.”  His wife was Ann Bawden, born in about 1830, probably in Cumbria’s Lake District. I have found no record of her death. Five children were reported to authorities via baptisms and census returns.

And that’s it – that’s all there is. Two butterflies behind glass, neither with a pulse, their souls uploaded to a genealogical app on my Mac.

For nearly fifty years, I have enjoyed this work. But I cannot let myself imagine that I know these two people any better than Nabokov’s field notes reveal something intimate about butterflies. The pleasure comes from filling in the forms.

For more on Nabokov and his butterflies, see Emily Temple, “Vladimir Nabokov’s Drawings of Butterflies,” in Flavorwire.