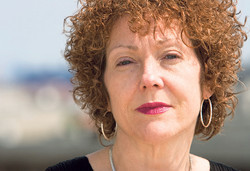 Over the past week, I’ve been reading Serbian writer Nina Zivancevic’s Inside & Outside of Byzantium, a 1994 collection that straddles boundaries between essay and fiction. One particularly fierce essay has stuck with me: “Pandora’s Box,” an anatomy of Zivancevic’s anger and frustration at the brutal violence then engulfing Yugoslavia, her collapsing country.

Living in Europe and the United States, Zivancevic is an ex-pat, an exile. This frees her to take action. She begins translating and transliterating, one after another, the names of all persons killed in the conflict, hoping that the mass grave’s roll call will galvanize a sustained international response.

It is hideous work: “I vomit every five minutes, almost once after every five names.” It also turns out to be a futile gesture: European and North American newspapers refuse to  publish her lists. Will it matter, she asks bitterly, if they change their minds?

The world, I’m afraid, will respond just as my French friends have responded when I mention such things to them – with casual indifference. A nod of a head during a conversation, then on to another subject. It makes my blood boil. I should calm myself, keep a cool head. I criticize myself and my generation of writers, artists, so-called intellectuals, but don’t understand why we have achieved such a monstrous, cumulative failure.

Her frustration reminds me of the British poet Norman Nicholson, writing two years into World War II, as the Luftwaffe pummeled an isolated Britain. In “Early March, 1941,” Nicholson writes:

We did not expect this; we were not ready for this –
To find the unpredicted spring
Sprung open like a broken trap…

We were not prepared for this. We knew
That the avalanche of war breaks boundaries like birches,
That terror bursts round our roofs; we were aware
Of the soft cough of death in the waiting lungs. But this
Has caught us half-asleep. We had never thought of this.

And so, Charlottesville. Apparently, many Americans were not just shocked but surprised at Charlottesville, as if we had never thought of this before.

Yesterday, I received my latest copy of the Southern Poverty Law Center’s Intelligence Report. Dedicated to combatting violent extremism in the United States, the SPLC documents the activities of neo-Nazis, the Klan, and other hate groups. At the end of each Report is a selection of nearly two dozen incidents of hate from the tens of thousands reported in the United States over the previous three months. The SPLC has been compiling such data for decades.  Remember the killing of five protesters at Greensboro in 1979? Alan Berg’s 1984 murder? The 150 schoolchildren held hostage in 1986 by Aryan Nations? The Coeur d’Alene bombings  that same year? The 169 persons murdered in the 1995 Oklahoma City bombing? SPLC remembers all this and more.

Our habit of forgetting is a political manifestation of anterograde amnesia: the inability to create new memories. We hear about one event after another, but none of them sticks, and we seem unable to detect any connections between them. It is as if we kept misplacing our car keys, or forgetting to pick up our own child from school. Some itch scratches the backs of our heads – what is it? what have we forgotten? Then comes Charlottesville. Oh. Right. It’s that.

Zivancevic is repelled by what she considers our willful refusal to see the pain of others. It is, she says, “a monstrous failure.” I would not use the word “monstrous,” which evokes a crime so great our redemption is impossible. I’d say instead that our recurrent amnesia, while self-serving, is entirely human. Because it is a human frailty, we have the power to confront it.

That, I think, is one thing public protest does.

People ask – whether cynically or from genuine curiosity – whether demonstrations actually achieve anything. In rare cases, demonstrations do make an immediate practical difference. In Boston, for instance, protesters yesterday shut down a white nationalist rally.

Yet few marches accomplish anything so tangible. Participants follow the parade permit’s prescribed route, cheer when drivers honk their horns in support, applaud speakers with whom they already agree, and drive back home again.

Yet even the most anodyne parade focuses the attention of both participants and witnesses. Demonstrators reinforce, enact, and quite literally embody memory.

There are dangers in this: crowds can become mobs, and “memory” can become dangerously selective. Separating from the crowd is just as important as joining it. Moving back and forth between self-reflection and collective action is, I think, an essential practice.

That self-reflection is best done away from a screen. Zivancevic also writes of her mother, staying in her Belgrade apartment during the Yugoslav wars:

She has become a victim of the television. She stares at it daily, absorbing the misinformation. The latest announcement issuing from that gruesome box: five Serbian villages in Lika were attacked by neo-fascist Croatian Ustashis. Another announcement: several people died in a fight last night, allegedly Serbs defending their property in a village near Gospic… “Mother,” I said, “you watch too much TV.” She is silent, but I can tell that the story upset her.… My poor mother, still tortured by memories of another war. I grow furious at television, and how it coldly manipulates one’s fears and anxieties. So many lies pour out of that box.

Cultivating solitude, reading widely, submerging ourselves in larger communities of purpose, and then stepping away from them: these are well within our human capacities, and can go some distance to redeem our human failings.