A couple of days ago, I finished reading Joe Brainard’s I Remember. It’s been used as a model for kids learning to write, and has been imitated as well by more experienced writers, notably Georges Perec. Watching ash fall from four local fires and hearing from friends and relatives whose homes are threatened, I found that Brainard had given me a way to talk about living in a city that lives with fire.

I remember ash like a fog hugging the ground.

I remember saying this looks like the end of the world.

I remember breathing air we called acrid because the news called it acrid. It stank, but the word acrid wasn’t right.

I remember at Palisades Park, at the edge of the bluff. We looked across the bay: the whole ridge was on fire.

I remember a fire in Angelus Forest. I remember driving out Redlands, our daughter sleeping in a Red Cross cot. We picked her up, drove her back home. No one was scared, she said.

I remember televisions on for every fire. They had great shots from the sky, and they interviewed people who’d lost their houses. I’m just glad we’re all safe, they all said.

I remember hoping every year for fires and earthquakes so I could stay home from school. I remember this was not something to say out loud. 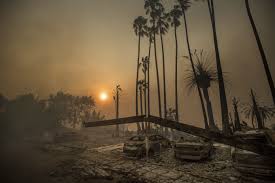 I remember ash like black dust on the windshield

I remember ash in my lungs, how much inhaling hurt.

I remember large flakes of ash skittering up the windshield like moths.

I remember that smoke got into the car anyway, even with the vents and windows closed.

I remember wearing a surgical mask and thinking this doesn’t work.

I remember the Sylmar earthquake. It was just after six a.m. on a schoolday.

I remember standing up on my bed for the Sylmar earthquake, seeing all the lights in downtown L.A. flash on and off. The books fell. The foundation cracked. On TV, somebody said: the greatest danger from earthquakes is fire.

I remember the next week when Miss Masaki couldn’t teach math because we talked about earthquakes the whole hour. I said: the greatest danger from earthquakes is fire.

I remember Mandeville Canyon and Benedict Canyon and Malibu Canyon. The ash wasn’t acrid but we said it was acrid. Cars pulled up and parents took kids from the gym. Even eighth graders were solemn. Not even teachers were shushing the whispers.

I remember standing with Donna on the apartment house roof looking out over a city of campfires. But they weren’t campfires. The ash that night was oily. Rodney King said: can’t we all get along? The answer was: No.

I remember Tejon Pass, blackened slopes on both sides. When did fire come through here?

I remember the ridge above Goleta, a line of fire from east to west. My parents lived there. Their retirement complex stopped serving meals. They spent a night in a hotel. I thought I’d have to bring them down to L.A. but didn’t need to. In the backcountry, the fire burned for two months.

I remember the Molotov Cocktail thrown in the house across our street when I was fifteen. The neighbors grabbed garden hoses and buckets. The firetrucks came quick, but the their back room was a loss. The woman who lived their said her ex wanted her dead. She and her husband rebuilt.

I remember the couple rebuilt. But the boyfriend came back, and he did it again. I was in the shower, getting ready for school. My mom said get out – there’s a fire. I took a bucket, filled it with water. This time the house burned to the ground. The woman and her husband left for good.

I remember with Danny we made paper airplanes. We lit their back wings with matches we found in the candle drawer. We pretended they were Lufwaffe Messerschmitts hit by RAF Hurricanes. The front lawn was wet from the sprinklers so nothing happened.

I remember lighting a match and burning an ant. I think I did that more than the once.

I remember a dorm room caught fire at UCLA. Was anyone in it? Three of us ran and tried to get in, but the whole room was engulfed. A fireman found us, ten feet away from the flames, arms up against the heat. What the HELL are you doing? Get the hell out! said the fireman when he saw us. We were angry. We weren’t just watching. We wanted to help.

I remember Santa Anas one year blowing out a transformer. The blackout was total. The neighborhood walked to the power pole, watching the crews as they worked.

I remember Mandeville fire sunsets. They were beautiful: deep reds and oranges all the way up.

I remember midnights in Morningside Heights, the light of apartments burning in Harlem. Insurance fraud, a friend said. In 1986 we said they’re burning the city.

I remember the fires in Greece. I watched them on television.

I remember the fires in Spain.

I remember the fires in Australia.

I remember the Eugene, Oregon airport where Uncle Steve picked me up to spend three weeks at his place in Roseburg. The sky was brown. The air was worse than L.A. smog. Why is there smog in Eugene? I asked. He said, They burn the grass every summer in Eugene. I didn’t ask who’s they? or why do they burn grass?

I remember the ash on his car at the Eugene airport.

I remember the phrase fire season.

I remember the phrase fire weather.

I remember fires in Java after monsoons came late.

I remember asking my dad, can you make a fire, dad? He made a big fire in the fireplace. My Dad put Les Baxter’s Ritual of the Savage on the record player. The fire played in the fireplace while Janet and I played Chutes and Ladders.

I remember when the neighbors’ garage caught on fire. He kept animals caged there, for the wildlife talks he gave to local schools. All the animals died. I thought I could hear them screaming, but it was the sound of the fire and the hiss of garden hose water turning to steam.

I remember fires at Los Alamos, New Mexico. I didn’t know there were forests there.

I remember Smokey the Bear. I confused him with Yogi Bear. Both lived in national parks.

I remember someone predicted: global warming will mean more and hotter fires. This would later be true.

I remember watching TV the morning of 9/11. By the time I tuned in, the two towers were smoking. I thought I saw flames. I thought: there’s no way those people can make it. And then, they didn’t.

I remember a fire and Max, a student, stayed with his dad in the zone. They wouldn’t evacuate. He said, My dad thinks if we stay and hose down the roof, we can save the house. They stayed. And they saved it.

I remember counting all the ways out of L.A. There are thirteen, unless you off-road. But from on the westside, cutting just four will stop us from leaving if there’s a big fire or earthquake or flood or tsunami.

I remember The World We Live In, vol. I, with the earth covered in magma.

I remember Chesley Bonnestal’s painting of lava on Jupiter inWilly Ley’s The Conquest of Space, with

I remember in college reading Hiroshima. John Hersey said that firestorms sucked oxygen right out of the shelters. Japanese who went there for safety asphyxiated.

I remember Apollo 1. Walter Cronkite said that fire sucked oxygen right out of the command module. Gus Grissom, Ed White and Roger Chaffee all died. It was a national tragedy, which reminded me of the Kennedy assassination.

I remember seeing the Cayahoga River burn. This was on television, but it made a big impression. I asked Dad for money to join the Sierra Club.

I remember when the Pirates of the Caribbean opened at Disneyland. We went with cousins from Chicago, who were visiting. The Pirates set a port city on fire. I remember thinking: how do they make the fire look so real?

I remember a former student, in a private plane her uncle piloted. He crashed just two miles from my house and burned to death.

I remember the phrase auto-da-fé, and looking it up.

I remember the Buddhist monk Thích Quảng Đức. In Saigon, when I was five, he burned himself alive while sitting in lotus position. I was too young to know why. Do I really remember watching it then? Or have I watched it so often since then that I only think I saw it when I was five?

I remember it looks like the end of the world.