The story is this: Mary bore the twin sons in the shopfront’s upstairs bedroom.  She and her husband Will named one of the infants Bruce Leroy.  The other, born dead, never had a name.

This was in February of 1906. It wasn’t a particularly cold winter, but the ground would stay frozen at for at least another month. You’d keep dead bodies in an outbuilding until the soil thawed enough for burial. This gave Mary, my dad’s grandmother, a while to think.

At the time, her husband Will and his brother Tom owned photography studios in rural Illinois, about a half-day outside Chicago. Most of their business came from “cabinet portraits,” photographs done up on thin paper, affixed to thick decorative cardboard backings, and displayed in parlors all over middle and working class America. The technique was surprisingly durable: a century later, in closets and attics across the continent, cabinet portraits still fill old photo albums. Or, discarded by heirs who can’t identify a relative, they fill shoeboxes, a relict population from the last century living on at  check-out counters at Goodwill, the Salvation Army, antique and junk stores, and hundreds of flea markets.

It was rare for women’s names to appear on photo studio signage or be embossed on portrait frames. However, because few small town businesses could afford to hire assistants, wives did much of the work. Ostensibly, Seneca was Will’s studio, while Tom ran the shop in Morris. In fact, the business depended as much on Mary and on Tom’s wife, Louise.

So the story is this: A short time after the birth – a few hours or a day, maybe – Mary got out of her bed and headed downstairs to the studio. Her husband was asleep. She carried the son they’d named.

Downstairs, she lay the living infant in a cradle – the one used as a prop when families brought their own newborns for their first portraits. Next to the surviving twin, she lay his stillborn brother’s cold and stiff little body.

She wedged them between pillows so that the living boy wouldn’t move much if he woke.  In her nightgown, she walked the six steps back to the camera, made the adjustments, and took the exposure.

She then put corpse back in its place. Bruce Leroy, sleeping through the whole thing, stayed in the cradle. She went to the darkroom, developed the image, and centered it on a card embossed with a fleur-de-lis.Sometime in the next few days, she mounted the photo on a wall in the parlor.

A year later, both Will and Tom died: lung ailments, picked up when, as boys, they mined coal and lead in the Isle of Man and Lancashire. Cabinet photography, a good business in the 1890s, was about played out. Louise gave it up first, moving back with her folks. Mary hung on for a few years, but with four children to raise, was ultimately forced to pick up and move the family to Chicago, where she got by with baking, cooking, cleaning houses – anything that paid.

The photograph hung in that Seneca parlor for fifteen years, and then was remounted in walkups on Chicago’s south side.

The only reason I know this photograph ever existed is a long conversation with Grace, a cousin of my Dad’s. She visited L.A. once, back in the mid-80s, and, during the entire meal, walked us through the family lore.

Grace spoke about that photograph with a combination of amusement and  disgust. How could Mary have even taken a photo of that dead boy, right up next to Bruce? It was disgusting! Why had they kept it out, right there in the parlor? The whole story seemed bizarre: as if my great-grandmother had suddenly gotten it into her head to do a walk-on role in a horror story.

A couple of years later, though, I read a poem – I wish I remembered where. The poem concerns eight elderly brothers, gathered for the funeral of a ninth. Before burying him, they take his long stiff corpse out of the casket, lean it up against the outside wall of a barn, gather around it, and have a photo taken: the last full family portrait.

This was my introduction to Victorian death-portraits, a type of memento mori that lasted into the early years of the twentieth century. By the 1910s, there must have been hundreds of thousands of death portraits on parlor walls throughout North America.

But in the 1920s, tastes changed. The next generation, appalled at the frank and unashamed display, found the whole thing morbid and embarrassing. Many of these memento mori were just trashed. Others ended up hidden in drawers and cabinets, unlabeled and unloved. That was Grace’s generation. She didn’t destroy this photo, but someone in the family likely did.

Maybe, though, it survived. Lately, I’ve started asking cousins if anyone inherited a portrait of two unnamed babies in a crib. It would be one of those things you’d want to get rid of (who can identify a century-old baby picture?) but, because of its age, you might find yourself unable to toss it. 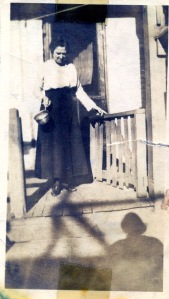 Mary, just before moving to Chicago.

Frankly, I am not interested in the photograph itself. I don’t really need to see the living and the dead infants side by side: it’s two much like turning my head toward a traffic accident.

But I do want to confirm Grace’s story. I want to know with certainty that, just after a full day of labor and the birthing of two infants, my great-grandmother Mary rose from the birth-bed, slipped downstairs, posed the warm and cold bodies next to each other, took the shot, returned the dead infant to its wooden box, walked to the darkroom, prepared the portrait, and put it up in the parlor so she’d see it, the next morning, in the light of day.