On each side of the strait, two cities
one blacked out, occupied by the enemy.
In the other the lamps are burning.
The bright shore hypnotizes the dark one.

I swim out in a trance
on the glittering dark waters.
A low tuba-blast pushes into me.
It’s a friend’s voice, Take your grave and go. 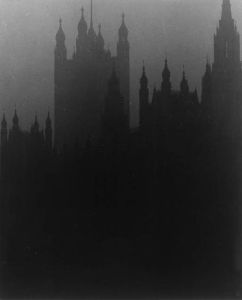 Decades of teaching and writing history make the first stanza’s literal meaning nearly impossible to surmount. Where is this, I’m asking myself. Neutral Sweden and occupied Denmark in World War II? France and Britain? I’m thinking too about Luftwaffe bombers navigating by the lights of the neutral Irish Republic to find their way to Belfast.

Then – very abruptly, the second stanza makes a wreck of my first earnest reading. I am out of my depth. I’m not swimming in a trance alongside Tranströmer. I’m alone and treading water. The best I can do is take a hint from the poem’s shape. I think: maybe the “strait” is the stanza break itself. The first stanza is well-lit. The second is as dark as an occupied country. I can almost convince myself that this is right. But that last tuba-blast completely throws me. I mean, Take your grave and go? – what can I possibly do with that?

Back I go to the literal: that, in swimming away from one of these two coasts to the other (in which direction is unclear: the waters are both glittering and dark), I have made myself dead to the country I’ve left. Or I am dead to my friend, who speaks directly to my mind. Or I am not dead: I’m unresponsive to the brooding silence of a conflict momentarily suspended.

Forget it. I’m trapped in a rip current and am being carried right out to sea.

I turned to Teju Cole’s 2011 New Yorker essay on Tranströmer, hoping I can get some purchase on this eight-line puzzle. I am reassured by Cole’s flat statement that the best times to read Tranströmer “are at night, in silence, and alone.” It’s two a.m. I’m in the back of the house, away from the street. My family is asleep. Check, check and check.

Cole writes that Tranströmer’s work reminds him of

the music of Arvo Pärt and the photography of Saul Leiter… His poems contain a luminous simplicity that expands until it pushes your ego out of the nest, and there you are, alone with Truth.

In the middle of this observation, just where I’ve inserted the ellipsis, Cole quotes the very poem I’m struggling with. In fact, he quotes the difficult second stanza – but in Robert Bly’s translation, not McGriff and Grassl’s:

I swim out in a trance
on the glittering dark water.
A steady note of a tuba comes in.
It’s a friend’s voice: “Take up your grave and walk.”

This is distracting. I don’t like Bly’s version at all. I particularly dislike the flatness of line three’s prepositions (“of” and “in”) and Bly’s decision to substitute a “steady note of a tuba” for the more evocative “low tuba-blast.” In the first version, the friend’s voice is ominous: the old King calling to Hamlet to his duty rather than a friend giving some advice.

Okay. Forget the translation. Too much of a distraction, and anyway, I’m hardly in any position to judge whose reading of Tranströmer’s Swedish original gets closer to the man’s sensibility.

I go back to Cole’s associations. Arvo Pärt I know and greatly love. I put Tranströmer aside and listen to Pärt’s “Litany.” I find it lyrical and melancholic, almost unbearably so.

The quality the two share is elusiveness: Pärt’s fugue-like repetition bypasses conscious thought while reaching directly into some hard knot of emotion and memory. I go a few minutes at a time before registering the fact that I’m hearing music. It is a very strange sensation. The way Pärt pricks something at the edge of my consciousness is, yes, a talent Tranströmer has mastered, in this poem and in others.

With that experiment a success, I follow Teju Cole’s lead and consider Saul Leiter.

I start the evening entirely unfamiliar with Leiter, so I turn to Tomas Leach’s 2009 biographical documentary, In No Great Hurry. Leiter is (it turns out) one of the great photographers of the late 20th century, famous for his street photography and use of color.

Some of Leiter’s most striking images obscure a face or a body behind falling snow, marbled glass 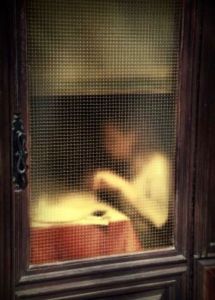 or a rain-washed window. Some of his portraits (and particularly the self-portraits) reveal only a bit of the face, or consign it to the background, making it part of the landscape.

I try rereading Tranströmer’s “Two Cities” through Leiter’s lens. This requires that I demote the first stanza to the background, and instead start with the second stanza’s metaphorical – even mythological – language.  The glittering dark waters, the tuba’s foghorn baritone: let’s start here.

I’m really shocked at the effect: it’s like looking at that optical illusion, the one in which you see the Maiden and then, abruptly reverse field and see the Crone. Suddenly, the second stanza is the whole point of the poem! I have to start, where the poem ends, in the grave, and work back to a friend’s words, calling me back from it. Is this really what Tranströmer is doing here? I don’t know: but it is a much more satisfying reading.

I wrote the last paragraph  late last night, in a rush. This morning, I found Michael McGriff writing in Bookforum about Tranströmer’s work:

Tranströmer is not a poet to write explicitly about place or the postwar psyche; rather, his poems summon images that haunt by gesture and allusion. Below is my translation of “Two Cities.” Reading this poem, one can’t help but think of Sweden’s wartime neutrality, and the range of complex emotions that one might feel looking out over the waters, knowing that the countries in the distance were occupied or under siege.

Hah! So after all that, McGriff – who translated the poem! – pulls me back towards a literal reading of that first stanza!

Well, I’m not having it. Not on its own, anyway. I’ll take both the Crone and the Maiden. Thank goodness that Tranströmer himself, so far as I know, has remained silent about “Two Cities.” I remain free, within the limits of the language, to read it as I choose.