The other day, I picked up Robert Bly’s Point Reyes Poems, a chapbook first published in the mid-70s.

Bly is best known for Iron John: A Book About Men (1990), a manifesto calling for new rites marking the passage from adolescence to manhood while betraying deep anxieties about the shifting ground beneath family, marriage, and gender. Bly’s ideal man was a bit chimerical: one part Navy Seal, one part dharma bum, one part passionate husband, and one part compassionate dad. As is true with many such projects, Iron John made a splash, generated some controversy and, within a few years, became an artifact of a particular cultural moment.

I read Iron John years ago without feeling particularly moved by it. Point Reyes Poems, though much briefer, has gone deeper.

This little book’s dozen poems read like quickly composed watercolor sketches; I imagine Bly writing them in a pocket notebook as he walked Point Reyes, a near-island jutting out into the Pacific north of San Francisco. Bly is summering here along with his young family, and suffuses these observations with a sense of sureness that he and that family belong here:

Thinking of a child soon to be born, I hunch down among friendly sand-grains. . . . The sand grains accept a worried man, for they love whatever lives without force, a young girl who looks out over her life, alone. And they love whatever is not rushing blindly forward, the mole blinking at the door of his crumbly mole Vatican, and the salmon far out at sea that senses in its gills the Oregon waters crashing down. Something loves even this planet abandoned here at the edge of the galaxy, and loves this child who floats inside the Pacific of the womb, near the walls, feeling the breakers roaring.

This invocation, the whole of “Welcoming a Child in the Limantour Dunes,” may begin with worry, but ultimately Bly surrenders here to a deeply rooted benevolence. His tone is one of subversive optimism – subversive, that is, of the toxic cynicism and rage generated in this nation’s last round of bitter political conflict. Bly very early propelled himself to the center of that conflict: beginning in 1964, he organized, marched, spoke, and wrote against the Vietnam War’s dishonesties and deceptions. “More than any other poet,” writes Michael Witt in his introduction, “he was consumed by the war.”

To stand against your country’s majority and its political leadership, as Bly did for most of these years, imposes a burden on those who would carry it. Bly brought that burden to Point Reyes, where it gnawed at the edge of his morning thoughts:

Walking. Afternoon. The war still going on. I stoop down to pick up a salamander. He is halfway across the mossy forest path. He is dark brown, fantastically cold in my hand . . .

That salamander, like all the creatures in these lightly crafted miniatures, is a small but effective counterweight against the soul-destruction and heart-hardening that relentless political engagement can ultimately inflict. The sheer other-ness of this unbuilt landscape pushes Bly’s political concerns out to the periphery of what matters. 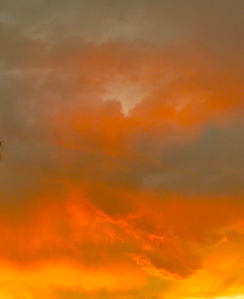 Bly is particularly attentive to shades of solitude. Over one afternoon, as the light changes, “the sea grows more and more private.” On another day, “the three-quarters moon moving in broad daylight, pale and urgent” sails “eerily forward, orphaned, bold, and alone.” On a third, Bly ascends a trail with his small son, who “falls back to bend over a banana slug, then senses how lonely the slug is, and comes running back.”

Of course, the loneliness doesn’t belong to the sea, the moon, or the banana slug. It is what Bly feels in their presence, an outsider to their interior world.

That sense of standing at the edge of things returns when, from a tidepool, Bly picks up a purple nineteen-armed starfish. He is astonished at the miracle of its profusion. He examines the arms and their suckered feet. Then he returns the starfish to its pool:

He unfolds – I had forgotten how purple he was – and slides down into the rock groin, the snail-like feelers waving as if nothing had happened, and nothing has.

Spending these days with the regular thrum of living and dying, Bly is, at turns, astonished, contemplative, anxious, and at peace. What is absent in this passage and in all of these poems is an event, either at Point Reyes itself or from Bly’s own past.

Really, it’s as if nothing has happened.

At least, nothing visible.