If you lose your parents in middle age, then by the time you sort their school papers, you’ve resolved most of the resentments and shame carried over from whatever havoc you think your upbringing wreaked upon you. Your grief, though never fully evaporated, has ebbed. You have some distance.

As you sort the first box of belongings, stuff cast off when your folks were in their twenties, an odd sensation creeps up on you: in this box, they’re the same age as my own kids. Then comes the next box, the flotsam of their childhoods: they could be my grandkids.

This parental instinct grows as you go deeper into the photos and files. Whenever you detect a glimmer of ambition or creativity or athletic drive in some decades-old school report, you root for your young mom and dad, as a parent would. Of course you know, if your family is like most, that these early successes didn’t end up amounting to much in the end. You already know how the story ends: you have a grocery bag full of old check stubs and tax returns and letters, hinting perhaps at discord, disappointment or difficulty.

Taking a break, you wonder if, maybe, there’s something you’ve missed, some hidden corner of their lives, some unopened box containing evidence of an unsuspected triumph. You shake your head: you know that isn’t so. Their achievements, all said, were honorable but modest. Even so, returning to your evidence in front of you, you can’t help wishing their forward-looking and ambitious young selves god speed. 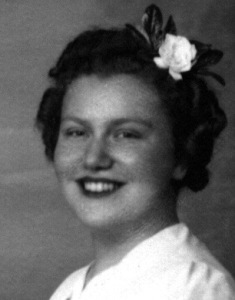 My mother went to very small school in Quaker Springs, New York, amid corn and dairy cattle. Her parents owned a general store and sold some of the chickens, eggs, and vegetables raised out back. From there she went to Mechanicville High School, which drew from the small towns and resorts in Saratoga County. Then to teacher’s college in Albany, where she trained to teach English, Math, Spanish and French. Her education was solid: she was the studious and socially stilted valedictorian.

Examining the driftwood cast up after her death, I learned that right through her first years of high school teaching, she wanted to become a writer, an aim attested in file folders containing poems, in several drafts, annotated, retyped, and copied with carbon paper. I’d never seen them before, though I do remember that she’d write Dorothy Parkeresque doggerel on thank-you and birthday cards.

The three dozen poems, all rhymed and metrically conventional, speak mostly of her solitude (she married late and had lived with her mother before meeting my dad) with a voice amused, needy, cynical, painfully self-conscious, and resigned. She reworked a few of them, and kept a short list of magazines and journals that might take them: The New Yorker, she thought. The Atlantic, maybe. The Nation. None did.

I suppose her schooling can be blamed. The poetry she read in high school and college was solid 19th century stuff: Tennyson, Dickenson, Whitman and Wordsworth. The state-approved anthology ventured on timorous little tippy-toes into a few of the safer 20th century voices: Stephen Vincent Benet, Edward Arlington Robinson, Edna St. Vincent Millay, and Robert Service. I remember her sitting at the edge of my bed reading from that college anthology, its regular rhythms lulling me to sleep.

This diet of the conventional did not prepare her to say what she wanted so badly to say. The term confessional poetry is damning, redolent of workshops in which aspiring MFAs read a poem and then explain, as if the poem weren’t enough, that the sentiment really is authentic, rooted in a personal event, one so searing that no one in the group feels comfortable criticizing the poem as a poem. It’s nearly thirty years since Dana Goia skewered the workshop model that does to poetry what a half-hour in boiling water does to a Brussels sprout. It’s food for guests who forget to bring their teeth.

Her poems are lamed by overdone sentiment and anachronistic language and all the rest. She just didn’t have the training or the language or the models. And she didn’t have the nerve: she knew things about herself and her family which just weren’t going to get written. My mother colored within the lines most of her life. What she left were verses that reveal more about her younger self than she intended.

I recently read Maxine Kumin’s The Retrieval System. This too is “confessional poetry.” Maxine Kumin, it happens, was my mother’s exact contemporary; the two were born and died within a year of one another.But Kumin had the training, in the 1940s, that my mother lacked. She went to elite schools all the way through: a private high school in Philadelphia, and then Radcliffe. The 20th century’s poetic revolutionaries, the godmothers of confessional poetry, were in easy reach. Her teachers and professors trained her up in the older and sometimes tedious work of mastering poetic form and function. By the time she started writing, she understood that you can’t follow your painting or poem around and explain it to someone else’s eye or ear. It has to account for itself, immersing strangers in its ruthless details.

Writers like Maxine Kumin teach readers to swim by teaching them first to drown.

As a result, it not essential to know that Kumin’s later poems, some of the most wrenching but coolly observed meditations on absence, expressed her grief at the suice of friend and literary confidante Anne Sexton. The facts of this friendship and abrupt end reveal much about Kumin’s poetic concerns. But they do not intensify the work’s authenticity, close observation, or searing intimacy. The poems stand on their own two feet.

In college, I took exactly one English class. I have never worked my systematic way through the Norton Anthology of the Literary Canon. I pick up poetry higglety-pigglety from bookshops all over the Pacific coast, not much caring who is who. My rule: read, and let the work lift me, bore me, or lay me low as may be.

This means that I possess only a vague sense of literary chronology. For that reason, when I read Retrieval System, I imagined Kumin to my own age or thereabouts. I was taken aback when I checked her biography and found that no, she was in my mother’s generation. How can this be? That Mom’s lifetime overlapped with that of Maxine Kumin and Anne Sexton and Marianne Moore and Elizabeth Bishop and Sylvia Plath and Gwendolyn Brooks seems all wrong, like she (or they) were transported from one universe and into our own.

It’s not generations that differentiate us from one another. It’s social and personal and aesthetic networks. My mother did not belong. But then, most people never do.