Last week I read Gerard Manley Hopkins at length for the first time (I’d read “Spring and Fall” several times before, but that was it). The same week, Mary Oliver died. I listened to a recording of Oliver with a friend and read a few pieces from her 1992 Pulitzer-winning New and Selected.

The universal eulogy of Oliver, that she was among the great modern “nature poets,” puts her on the same shelf as Wordsworth and Emerson or, more lately, Gary Snyder and Wendell Berry. It also brackets her with Hopkins himself. And echoing Hopkins, she frequently encounters the divine in the natural world.

Both Oliver and Hopkins unified their respective tribes. Oliver’s fans range from the avowedly conservative environmentalists of ConservAmerica through the militants of Greenpeace. Hopkins, though an uncompromising Anglo-Catholic, has a dedicated following among evangelical Protestants. (Hopkins’ position in Christian culture is much like that of C.S. Lewis, an Anglican who Catholics have practically adopted as one of their own). A taste for Oliver and Hopkins transcends all environmentalist schisms and doctrinal divides.

Their styles, of course, are quite different. Oliver’s poems are often contemplative monologues – prayers, one friend calls them – which yoke conversational and lyrical language. Hopkins’ work is intense, its percussive musculature pushing hard into each syncopated stride: no conversational asides here. More, they handle time very differently. Oliver is a season. Hopkins is an event.

What the two share is a willing love of a world that, they believe, deserves their love. More, they see the divine within that love-deserving world. This is of course a central truth of Hopkins, but it is no less true of Oliver as, for instance, in  “Wild Geese”:

…
every moment of your life
you have this choice,
you can either be the host to God
or hostage to your ego.
Come home again.

Hopkins would certainly disagree with the Mary Oliver’s first stanza: if he found himself a pilgrim some miles short of Campostella, he’d drop to his knees and crawl toward the shrine. Yet with Oliver he believed that the “soft animal” of the ensouled human body knows its way to God more surely than the hard and sinful head. Theologically, at least, he would have endorsed Oliver’s conviction that “you can either be the host to God/or hostage to your ego.”

In the phrase “host to God,” Oliver identifies God not as a creator who stands apart from nature, but as a conscious presence within and infusing nature. Hopkins too sees God this way. “Christ plays in a thousand places,” he writes. And Hopkins finds God’s active consciousness in all eyes and wings, in all his kingfishers, dragonflies and kestrels.

Neither Oliver nor Hopkins worship nature: they’re not pantheists. But they both edge toward panentheism – the idea that God is an aware presence within the world –  that the divine pervades the sensate consciousness of all living things, seeing from all living eyes into all living eyes.

Hopkins is much more explicit about this than Oliver. Hopkins’ Christ is “lovely in eyes not his.” Hopkins’ Father present in “the features of men’s faces.” The creatures in Hopkins are fused and infused with God’s will. Through this union, a bird in flight achieves the “mastery of the thing.”

Animals, of course, have no choice in the matter: every animal is exactly what it was created to do. So kingfishers are for catching fire and dragonflies are for drawing flame: “What I do is me: for that I came.” Each leafy and fleshy thing on earth exists simultaneously as both I and as Thou.

The pathos of Hopkins’ poems emerges from his conviction that humanity cannot achieve such creaturely oneness of essence and act. Sin estranges human will from the divine, tearing the human soul apart. Broken into pieces, we reach for the “carrion comfort” of self-pity and enlarging the “done darkness” of our own divided hearts,  “wrestling with (my God!) my God.”

For Hopkins, nature serves God’s purposes, not our own. The syncopated staccato of his verse intentionally disorients the reader, hammering against the notion that language can constrain creation’s complexity and beauty to fit cosily within the limits of our understanding. Yes, we can look at the kestrel. But Hopkins’ language defies us to imagine ourselves as kestrels. The verbal barrage soars, and the metaphors double back on themselves. The bird is not “as a skater” but “as a skate’s heel,” and then takes flight, simultaneous in its “hurl and gliding,” its “brute beauty” and so on. This is not the way our dreams dream of flying.

Mary Oliver’s natural world is by comparison quite tame. Consider her poem “The Kookaburras” (a near-synonym for Hopkins’ kingfishers). As the piece opens, Oliver is in a bad place, not far from Hopkins in “I Wake and Feel the Fell of Dark,” or “Carrion Comfort.” “In every heart,” she writes, “there is a coward…”

For Oliver, though, redemption is close at hand because “in every heart there is a god of flowers, just waiting/to come out of its cloud and lift its wings.” And just then, who should turn up in the poem but “the kookaburras, kingfishers pressed against the edge of/their cage.” These kingfishers “asked me to open the door”:

They didn’t want to do anything so extraordinary, only to
home to their river
…
As for myself, I am not yet a god of even the palest flowers.
Nothing else has changed either.
…
The sun shines on the latch of their cage.
I lie in the dark, my heart pounding.

The “I” of Oliver’s poems is the “I” of her goldenrods, alligators and finches. Every “I” really is herself. Any creature who wanders into Oliver’s garden risks entrapment in metaphors built around Oliver’s experience, not theirs.

These same creatures, catching the attention of Gerard Manley Hopkins a century before, do not become his symbolic familiars. In fact, they refuse to become symbols at all. They are, for Hopkins, God’s creatures, and it is God who is visible in their appearance, their energy, and their movements.

The biggest difference between Oliver and Hopkins is this: for Oliver, nature is storehouse of metaphor. In Hopkins, though language is metaphoric, every image is literal. When Hopkins says that God muscles into the world with each gesture of animal and plant, he means exactly what he says.

For this reason, reading Hopkins can be a disorienting and even uncanny experience. No wonder Oliver has the larger audience. 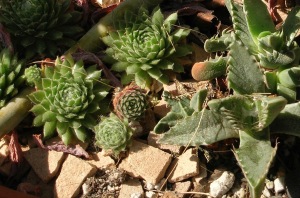